Gahanna is planning to relocate its parks-and-services operations complex and demolish a 1960s office building along Granville Street to create a more walkable downtown district.
As part of a broader GoForward Gahanna strategic plan, the city wants to extend Shull Avenue toward Friendship Park by tearing down the city-owned building at 181 Granville St. 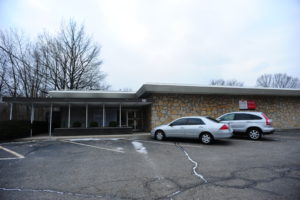 This office building at 181 Granville St. in Gahanna is targeted for demolition.

A service operations complex of landscaping supplies and road salt also would be moved to an as yet undetermined location.
Crafted with input from residents and consulting firms, the suburb’s vision is to leverage several centralized districts.

“We’ve got Creekside, which is a huge upside for the city of Gahanna as a destination,” Mayor Tom Kneeland told me. “There’s much more down there than just Creekside. Olde Gahanna is really the area we’re trying to focus on, encourage investment and development by the local community.”
No major projects have been put forth from private investors, but several developers have been vetted on the city’s vision and given driving tours of the sites, said Anthony Jones, director of planning and development.
A walkable downtown district – “characterized by arts, culture, retail and entertainment” – would be implemented by year-end 2021 under the GoForward plan, which also calls for 2,750 new jobs over the same period.

The handful of small office tenants at 181 Granville St. are aware of the planned demolition, said Alterra Real Estate Advisors President Brad Kitchen, who handles leasing for the building and serves on Gahanna’s strategic planning committee.
The 10,200-square-foot class C property will close by July 31, according to Alterra.
“We’ve been working to relocate (tenants) throughout the city,” Kitchen said.

The city has not identified funding sources. A new operations complex would cost about $3.2 million, according to a five-year city budget put forth in 2012.
Also included in the GoForward plan:
– Modify the city code to support food trucks by year-end 2017.
– Implement directional signage for pedestrians by year-end 2021.
– Establish a funding commitment for repairs and maintenance to public portions of the Creekside development by year-end 2021.