Commercial Real Estate Trends to Watch Out for in 2016 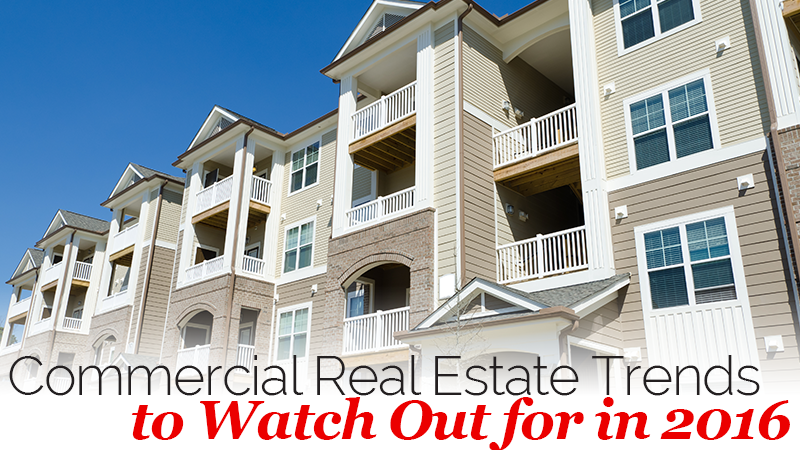 The new year has finally arrived and it is expected to bring a number of changes to the nationwide commercial real estate market as well as the local market in Columbus. Retail spaces across the country are adapting as new trends emerge. Locally, Columbus is experiencing an incredible apartment boom. Let’s take a closer look at how these trends and others will play out in 2016.

The local market is experiencing an incredible apartment boom. Central Ohio apartment vacancies will likely hit a 16-year low in 2016. The local vacancy rate of 4.9 percent is lower than the nationwide average of 5.2 percent. The increasing demand for apartment space is attributed to the area’s uptick in hiring. The local vacancy rate will likely reach 4.5 percent by the end of the year. Initial forecasts indicate that developers will erect 1,080 rental spaces this year while the area will add around 1,650 renters. It is expected that Columbus’ average rent will climb 2.6 percent to an average of $867 per month this year.

Apartments Added Across the Nation

The vast majority of economists agree that unemployment in the United States will continue to decrease across 2016. Some estimate that it will dip well below 5 percent in the first few months of the new year. This increase in employment bodes well for the retail, office and housing sectors/industries. About 10,000 baby boomers will retire every single day in 2016. Many of those vacated positions will be given to millennials, significantly boosting their spending power. These positive consumer spending trends bode well for commercial real estate as well as the rest of the economy.

Other Trends to Look For

As the unemployment continues to drop, both boomers and millennials will spend more money on amenities at shopping centers, entertainment complexes and beyond. The trend of urban population growth will likely continue to increase. Suburban communities are also becoming more urbanized thanks to the continued growth of public transportation and mixed-use developments across the country. This urbanization trend is set to fuel the growth of retail outlets, office spaces and housing throughout 2016 and beyond.

Economists also expect foreign capital to continue to flow into the United States’ commercial real estate market and housing market. International investors still view the United States as a “safe haven” for such investments as it is the most trustworthy real estate market in the world. The record foreign cash inflows of 2015 will likely continue in the new year. Retail shifts in the entertainment based spaces and mixed spaces (physical/virtual) are also poised to continue. Stresses on consumers will likely increase consumer spending with credit cards, thereby forcing them to spend a bit more judiciously. Yet the drop in gas and energy prices could offset such consumer hesitation, resulting in a continued upward arch in spending at retail establishments.

Anyone who is interested in current and future commercial real estate trends can obtain more information by reaching out to Alterra. We’re Central Ohio’s premier real estate buyer, seller and manager. Our operations are spearheaded by our company president, Brad Kitchen. Brad established Alterra Real Estate Advisors 17 years ago in an effort to provide insightful commercial real estate assistance to clients of all backgrounds and interests. He leads our mission to provide unparalleled service that is custom tailored to each client’s unique needs and desires.